Disappearing fish? No, it's not a magic act. There's a good chance you have a predator visiting your pond. This is one aspect of water gardening that we have the least control over, but we're not completely helpless.

Raccoons Raccoons are generally the most common predator of our pond fish and they can be found in almost the entire United States.  Raccoons are omnivores and will eat pretty much whatever food is available to them.  Around the pond this means fish, frogs, even turtles.  As they are primarily nocturnal, if your fish seem to disappear overnight, there is a high probability that this masked bandit is to blame.  This is especially true if you see a mess left behind; pots knocked over, fish scales and fins, etc.   Raccoons will fish from the shore or by wading into shallow water.  While they can swim, they will typically not be able to grab fish while doing so. 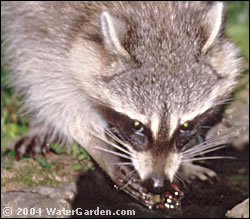 Wading Birds This group of birds includes herons, cranes, egrets, and bitterns.  As the name implies these birds feed primarily while wading in shallow water.  The great blue heron is one of the most notorious predators of goldfish and koi.  These birds have an impressive stature at over 4’ tall with a 6’ wingspan.  They move through the water so slow they can appear motionless until they are ready to strike.  The sharp bill can spear a fish even larger than the bird can eat.  The stealth of wading birds often leaves no sign they were ever there aside from the missing fish.

Swooping Birds  This group of birds includes hawks, owls, eagles, and kingfishers.  These birds spot their prey from above and dive to attack.  Kingfishers are usually the bigger threat of this group as they can actually plunge as much as 2’ deep in the water to catch a fish.  The birds of prey (hawks, owls, eagles) around your pond are far more likely to be looking for frogs or rodents, but can certainly get fish as well.

Snakes  While pretty much any snake can eat fish, only water loving snakes like the common water snake have adapted their skills for catching fish.  This can be a tougher predator to stop and often would take catching and removing it to really solve this one.  But your bigger fish should be safe from the jaws of snakes.  Since the water snake is also feeding on frogs and other critters living in or near the pond, it's rare for a snake to completely deplete your fish population.  Also since the snake may be feeding on rodents or other pests, you may want to ensure that they are actually bothering fish before worrying too much about its presence. 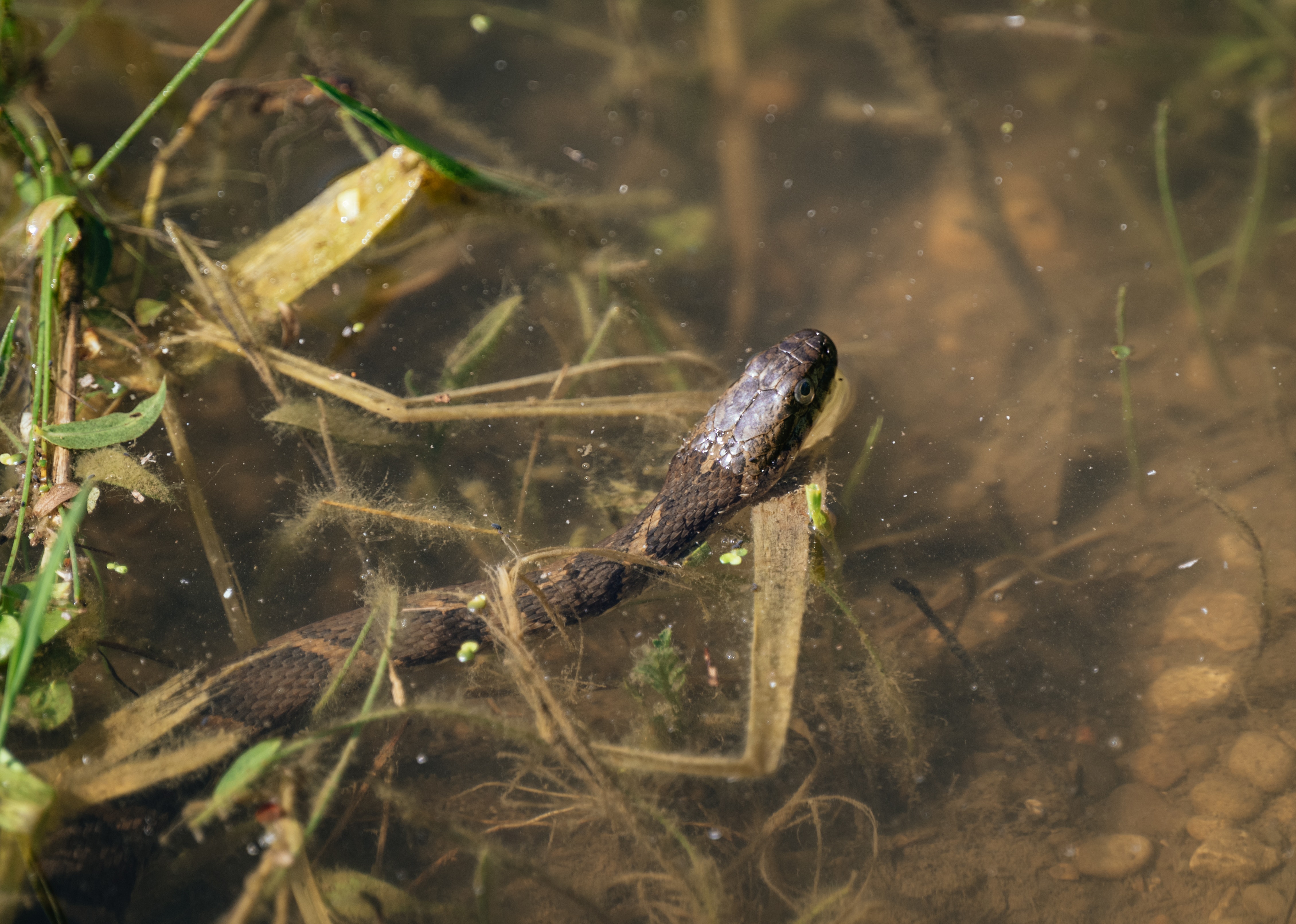 Frogs  Yep, many of us love the frogs that visit our ponds.  But they absolutely can and will prey on small fish.  However, the biggest culprit is the American bullfrog. These frogs will eat just about anything they can catch including small to medium pond fish.  This is another one that can be nearly impossible to prevent, so control is often catching and removing the culprits. I’ll mention here that some people intentionally introduce bullfrogs to the pond by catching or buying the tadpoles.  I would advise against this.  Not only can they eat fish they can also eat other wildlife in and around the pond.  They will often destroy populations of other frog species and even eat small birds visiting the pond.

Mink.  Mink have been called water wolves due to their voraciousness as pond predators.  Mink hunt primarily at night and can sometimes clean out a fish pond in a single night.  They are in the weasel family and can easily weasel into most ponds.  They will find a way through netting.  And if they have found your pond, you can bet they will be back.  As soon as you suspect a mink, adding pond dye to the water to reduce visibility in the water can help protect the remaining fish while a longer-term solution is found. 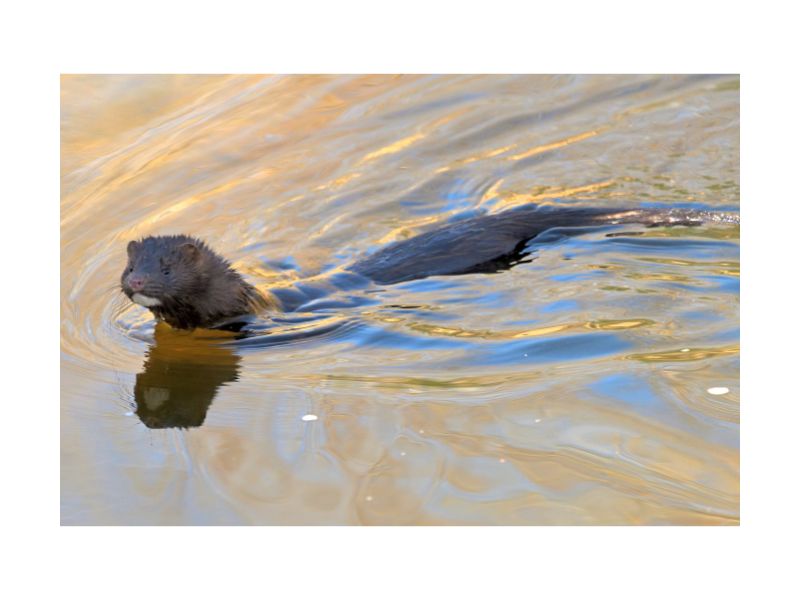 Otters  Like the mink, otters can be voracious and clean out a pond quickly.  While mink tend to hunt solo, otters often come in groups.

Cats  We had to add this one due to the sheer number of people who come to us with woes of the neighbor’s cat eating their fish.  While it is certainly possible for a cat to catch our pond fish, it is pretty rare.  That feline may visit the pond and show interest in the fish, but the fear of water is usually strong enough to deter them.  If you suspect a cat as the culprit, it’s more likely to be a raccoon or another animal.

While this list of potential pond predators is not exhaustive, it covers the most common problem animals.  If you have trouble with another animal, the best solutions are likely the same as the most similar animal described.

Pond netting is one of the simplest and most effective solutions to protecting your fish from predation.  There are many ways to install the netting.  It can be attached to domes, PVC frames, or just stretched tight over the pond and secured with stakes or stone.  Netting will deter most would-be predators from attacking the fish, but would not usually be effective against snakes or frogs.  And some determined critter could still find its way around or through.  The biggest drawback of the pond netting is that it will detract from the beauty of the pond.  But if it comes down to losing some aesthetic appeal or losing fish, we know which one we’d choose every time.

Fishing line strung over the pond in a loose criss-cross pattern can deter many birds.  The fishing line is similar to the netting but far less intrusive visually.  The birds may fly in to approach the pond and hit the nearly invisible line.  This startles them enough to move on.   A fence made of the filament can also be placed close to the pond edge a foot or so high to discourage land predators like raccoons or wading birds.

An electric fence enclosing the pond area can be effective against mammal predators like the raccoon.  You just need to make sure the animal cannot easily go under or over the fence.

Dogs or people will usually deter most predators.  But we can’t be standing watch at all times and we usually want our dogs inside with us rather than out on guard duty.  However, the more we are out by the pond or have our dogs roaming the yard, the less comfortable the predators will be visiting the pond.  A pond placed closer to the house will often have fewer predator attacks than a pond away from people for the same reason.  Some pond-keepers have success placing a radio or speaker near the pond playing talk radio as some predators will fear this means humans are near.

Motion Sensors can be used to frighten some would-be predators.  The motion could trigger a sprinkler or an audible alarm.  Either sudden action may frighten away raccoons or birds.  Even a motion light can be effective at times.

Aeration/Dye - Air bubbles coming from a diffuser in the bottom disrupts visibility and makes it harder for predators to see your fish.  Even more disruptive is the use of a pond dye to shade the water.  Note that a heavy concentration of pond dye can also have an impact on submerged plants.

Decoys - Unfortunately, most of these animals are smarter than we give them credit for.  While an animal decoy may give pause, the predators often figure out that it is not real and proceed with the hunt. 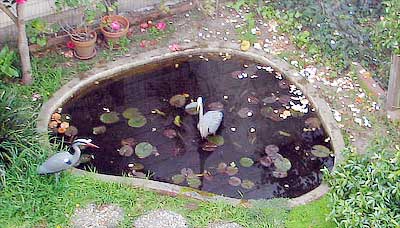 A customer sent us this photo that shows a "fake heron" at the edge of a fish pond. A real heron, seen in standing in the water, ate all the goldfish that were in the pond as the fake heron "stood watch".

Other/Pond Design  Factoring in would-be predators to your pond location and design can make a difference as well.  When constructing the pond, know that the closer it is to the house (where people are) the less comfortable animals will be visiting the pond.

Limiting access points can also be helpful.  A steep drop from the edge down to water level will make it harder for many animals to enter and exit.

Hiding places are always a good idea.  It may not protect all the fish, all the time but if there is cover for the fish, it will protect them from some predators and reduce the hunting ability.  This can be Koi Kastles, caves and tunnels made of stone, ceramic chimney flue tiles, etc.

Winter can be a time of concern for our beloved fish. Our plants' foliage will start to disappear. Without this natural cover over the water's surface, potential predators may see an opportunity for an easy meal. Cold weather means a greater chance of having prized fish "mysteriously" disappear. Fish movement in colder water is also slower meaning the fish will be easier to catch.  While they might be able to outrun a predator in summer, winter reduces their chances of evasion.  You probably put leaf netting over the pond for fall, why not leave it down for the extra winter protection.  Some people may also opt for sheets of foam insulation as an option to give fish extra cover in the winter.

It can be good to be aware of your possible predators and their natural cycle.  Expanding their hunting grounds can be worse when they are nesting and need to feed their young.

Sometimes nature will just be nature, there are predators and prey.  In some instances this is how you maintain a reasonable level of fish population.

Please consult with local wildlife agencies before attempting to trap or kill wildlife.  Or reach out to a professional wildlife removal company to handle this for you.

Click here to connect with one of our pond experts now.